I have heard the Neurotypicals in my life comment on my processing and perceptions of pain. As a result, my sister (also Aspie) and I had a long conversation about Autistic perceptions, Neurotypical Perceptions and pain. We came to some interesting conclusions.

Often, you will notice some odd things about your Autist and their tolerance for pain. Sometimes, it will seem that they don’t feel pain at all. Other times they will be hyper-sensitive to one form of pain and completely oblivious to others… Often in a way that is seemingly chaotic or lacking in any semblance of order.
I have heard questions like, how can my Autist not notice that they just cut themselves and are bleeding all over the place; How can my Autistic Spectrum child not even seem to care about the bruised hands and knees from a fall; but a light touch on the shoulder elicits a wince and groan of pain?
The question that one has to ask is this: Is your Aspie actually experiencing pain differently? Does he have a higher threshold for pain? Or is he just less verbally expressive of their pain?
After polling several other Aspies, as well as speaking to my sister on the subject – it seems that we don’t process pain in the same way or at all. In my sister’s case, she often will not realize that something is wrong until the offending body part stops functioning properly. As with all things that fall within the range of Aspie experience, it seems that pain is an all or nothing affair for us. I truly believe this statement applies to 99% of Aspies… There will be a small number that are different, but that is always the case.
How do we measure pain? At the hospital they will present you with the following chart: 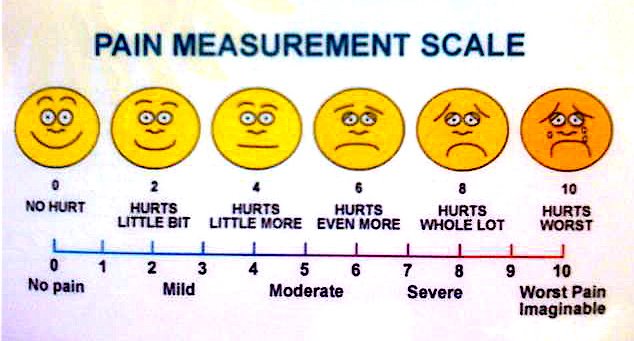 This scale seems useless to me. The word moderate doesn’t seem, in my paradigm to be a word that should not be applied to pain. I am either moderately inconvenienced or close to incapacitated.
Anecdotal evidence gathered from external sources has yielded stories of Aspies spraining their ankles and walking on it within 3 or 4 hours, bladder infections and kidney stones that were described as “annoying” as opposed to painful, wisdom teeth extracted with no follow up painkiller, nearly severed fingers not being noticed until the site was covered in blood and the like. From my personal experiences – I recently had two teeth extracted…no additional painkiller after the operation and only minimal discomfort.
The idea of moderate pain, is an alien concept for me and many others. The only conclusion that I can come to is that we, as Aspies, (GENERALLY) process pain differently.
Let’s talk about pain that doesn’t seem to make sense. These light touches and caresses that elicit a pain response, I believe (and the behavioral models seem to support this) are a result of a mechanism other than actual pain. Due to the sensory issues that are inherent to Autistic Spectrum Individuals, this pain response may be a combination of sudden exposure over-stimulation and the resulting cognitive dissonance. I can say that when I am experiencing a dissonant episode and I am aware of it, I have often explained it as “my brain feels too big for my skull” and it “hurts”. I am not sure of the validity of this supposition, but I cannot help but “feel” that I am accurate.

Personally, I have a high pain threshold. The Bean, P.K.S. and Shade have described it as stoic, but that’s not accurate. Once the initial trauma of injury passes, i just don’t notice it. I always have small bruises from smacking my hand on doorknobs, hitting my knees on things, small cuts, accidents with a hot glue gun and the like. Often, I don’t know that I’ve been injured til later (sometimes, much later).
From what the NTs in my life have explained to me. This is not the way THEY process pain. Small injuries can seem almost insurmountable and extremely traumatic. They will not remember from one time to the next what it felt like.
When it comes to pain, perception and processing – the main difference (aside from what I have covered thus far) is in anticipation and fear. Since we don’t process the mild pains, we don’t often have apprehension when facing a situation that might be painful.
Going back to my tooth extraction example: I have spoken to NTs in similar situations. They are afraid of the dentist and the pain that the procedure will cause. They are afraid to the point of being terrified. According to studies, anticipation of pain can amplify the effects of the actual pain by several orders of magnitude.
In my example, I was terrified… but not because a fear of the pain. I was terrified of the concept of someone I don’t know sticking their hands in my mouth. I was terrified by the idea of being touched by a pair of people in a BRIGHT room with strange smells. I was terrified of being pinned to an uncomfortable chair by my teeth… and I was terrified of complications due to anesthetic, but not by the pain.
I know an NT that had the same two teeth removed. The NT whined and complained for a couple weeks as they healed. They were restricted to soft foods and soups. The words here are not intended to cast a negative light on their experience… It is to illustrate that I have no frame of reference.
The day after I had my teeth out, I was hungry, so I went to Rallys and had a couple of their Smokin’ Sausage for lunch.
So… You may need to be vigilant with your Aspie. Be on the look out for injuries that they have sustained but may not have noticed. These can, at times, be dangerous or even life threatening. Don’t over-react though… just be vigilant… It is possible for your Aspie to fracture or break a bone… they can get small cuts… both of which open them up to infection… and they would not notice it until the injury has become an actual problem…
Also, be sure to listen… An expression of pain can be indicative of a dissonant event or actual damage. Either way, these expressions should be monitored and taken seriously as they are not something minor and have, instead, registered on the Aspie radar.
Images in this issue SHAMELESSLY stolen from the following sources:
http://origin.playstationlifestyle.net/assets/uploads/2009/04/pain-logo.jpg
http://livewithchronicpain.com/wp-content/uploads/2011/10/painmeasurementscale.jpg
http://izquotes.com/quotes-pictures/quote-doctors-have-told-me-i-have-a-high-pain-threshold-but-i-can-only-know-what-i-feel-i-think-i-m-johnny-knoxville-104049.jpg
http://www.imbecile.me/wp-content/uploads/2011/04/terrified-cat-looks-out-car-window-500×458.jpg
https://sphotos-b.xx.fbcdn.net/hphotos-ash3/556000_10151558256748259_2025533096_n.jpg
Follow me on social media... You know you want to!